Drug trafficking is defined as the illegal commercial exchange of illicit narcotics, as well as the equipment and products used to make and use the drugs. Drug trafficking laws vary from state to state, however, the severity of the drug trafficking charges filed in a particular case, along with the associated sentence (upon conviction), will vary according to: 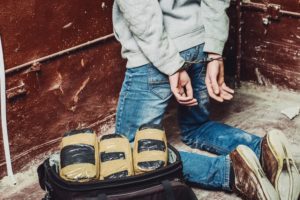 Federal drug trafficking cases are generally subject to mandatory minimum sentencing laws. A mandatory sentence is when the court is in a situation where judicial discretion is limited by law. Meaning, if you are found guilty of a crime, the judge must give you a certain minimum sentence regardless of whether he or she thinks that sentence is appropriate given the nature and circumstances of that crime. When it comes to drug trafficking cases, there are many federal minimum sentencing laws in place that have been passed by congress.

Generally speaking, a jury is not allowed to be told whether the case they are deciding on is subject to mandatory sentencing because it may sway their opinion if they think the punishment does not fit the crime. Instead, in a mandatory sentencing case, a jury’s role is limited only to determining guilt or innocence.

If the crime involves any of the following:

Drug trafficking is a very serious crime. In many ways, one’s entire life may depend on a guilty or innocent verdict. That’s why you may want the best federal drug trafficking lawyer you can find by your side. David M. Dudley is an experienced, Harvard educated, federal drug trafficking defense attorney who is ready to help you. It is sometimes possible to for an experienced attorney like David M. Dudley to negotiate around mandatory minimum sentences through bargaining and other mechanisms. Call 800-805-6167 right now for a free case evaluation.

Fighting to Protect Your Rights

Attorney David M.Dudley has an almost unparalleled degree of experience as a drug-trafficking lawyer in both federal and state courts. He has represented several defendants charged under federal organized crime statutes.

He has represented numerous others accused of performing various drug-trafficking roles, ranging from the supervision of international narcotics distribution and the manufacture of many kinds of drugs to the transportation of large drug quantities and the street-level distribution of controlled substances.

Mr. Dudley has defended against serious drug trafficking charges across the country. These prosecutions have involved as much as:

If you or a loved one is involved in a major drug-trafficking case, you will need a qualified and highly skilled drug-trafficking lawyer. Contact Mr. Dudley for a thorough evaluation of your case.

California federal drug trafficking attorney David M. Dudley has repeatedly secured acquittals, dismissals and other favorable results for drug defendants, often in the most difficult jurisdictions, with substantial evidence against them. He has extensive experience with search-and-seizure law, both federal and state, and has successfully moved for the suppression of evidence on numerous occasions.

An expert at practicing under the federal sentencing guidelines, Mr. Dudley, without significant exception, finds a way to achieve the lowest possible sentence for his clients after negotiated dispositions or pleas to the court. Mr. Dudley’s range of practice includes defending clients against prosecutions for white-collar crimes, drug trafficking, money laundering, and organized crime offenses.
.
Often in federal drug trafficking cases, the most important battle is the first one – the battle for release on bond. Although there is a presumption of detention in the majority of federal drug cases, almost all of Mr. Dudley’s clients obtain release pending trial.