Mr. Dudley has represented defendants facing three-strikes or career offender allegations in both federal and state courts. Frequently, he has been able to persuade prosecutors or courts to strike or disregard certain prior convictions for sentencing purposes, resulting in substantially reduced penalties for his clients.

In federal court, Mr. Dudley has regularly obtained for his clients sentences far less than those mandated by statute or suggested by the career offender provisions of the Sentencing Guidelines. In state court, he has obtained minimal prison sentences, and even probation, for many defendants facing potential life sentences pursuant to three-strikes or career-criminal laws.

What Are Three-Strikes Laws?

Three-strikes laws, like other career criminal statutes, target those who may be considered repeat offenders. The three-strikes name is borrowed from baseball terminology, as in “three strikes and you’re out”. In this context it means that if you are convicted of a third felony after two previous serious or violent “strikes”, (felony convictions), you will likely be facing a life sentence.

In order to qualify as one of the first two strikes, the previous felony convictions usually have to be violent crimes, or attempts to commit these crimes. These can include:

While the first two strikes are usually serious crimes, some of these laws do not require the third strike to be of a similar nature. Any new felony, regardless of how minor, will likely be charged as a third-strike felony. In some states, like California, a crime as minor as shoplifting can trigger a third strike charge.

Consequences of a Conviction 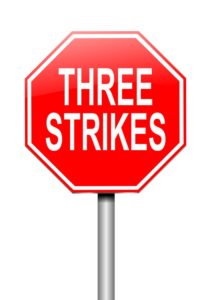 Even in cases where there is only one prior felony conviction, career offender statutes may mandate tougher sentencing guidelines, such as requiring time in prison, limiting time off for good behavior, or doubling sentences compared to first time offenders.

In most cases a conviction on a third strike will result in a sentence of 25-years-to-life, with no chance of early release. Parole may be granted after 25 years, but it is not guaranteed. In cases of life-without-parole, there is no chance of being released.

If you’re facing your third strike, you’ll need an experienced and highly aggressive criminal defense attorney on your side. To schedule an evaluation of your case with Mr. Dudley, contact our office today. For nearly three decades, Mr. Dudley’s law practice has taken him across the country, representing individuals facing major criminal allegations in 36 different states. He has represented defendants seeking post-conviction relief, and is admitted to the United States Supreme Court and seven federal circuit courts of appeal.