Mr. Dudley has defended a wide range of robbery cases involving defendants accused of robbing banks, jewelry stores, other retail establishments and individuals. Through aggressive representative both before and during trial, Mr. Dudley has obtained favorable results over the years in these cases.

To increase potential penalties in robbery cases, prosecutors often pursue kidnapping charges. Mr. Dudley has consistently defeated the kidnapping charges in these matters either before or during trial. He has also had success in defending against other penalty enhancements such as gang and firearm allegations. 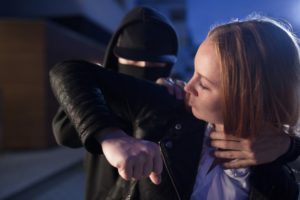 Robbery is an act of theft that involves the threat or use of violence. Robbery requires the taking of property while in the presence of the victim. Other facets of the crime include the alleged robber taking actual possession of the property, even it is just for a short time.

The stolen goods do not have to be taken away from the scene of the crime to constitute a robbery. Once the alleged criminal has taken possession of the property, the offense is complete, even if the property is quickly abandoned.

Common federal charges involve the robbery or attempted robbery of financial institutions such as banks, credit unions, and savings and loans. Bank robbery cases can illustrate how robbery charges can be added to by prosecutors by using circumstances such as weapons, or kidnapping.

Federal statutes state that any person who uses force, violence, or intimidation to take money in the care of a financial institution can be sentenced up to 20 years in prison. In the same robbery, if a person is assaulted, or their life is jeopardized by the use of a deadly weapon, the penalty increases to 25 years.

Kidnapping During a Robbery

Kidnapping charges would be included if hostages are taken to facilitate the robbery or aid in escape after the crime. A person is considered kidnapped during a robbery if he or she is confined or forced to accompany someone against their will in an attempt to avoid arrest for the commission of bank robbery.

Kidnapping charges add 10 years to a sentence. If someone is killed in the commission of the act, the crime can be punished by life imprisonment or the death penalty.

Robbery and kidnapping charges are severe and can affect a person’s life forever. If you are facing these charges, you will need an experienced and qualified defense attorney to aggressively defend your rights. Contact Mr. Dudley for the representation you need. He has represented individuals facing major criminal allegations in 36 different states and handled matters in both the trial and appellate courts, state and federal. He is admitted to the United States Supreme Court and seven federal circuit courts of appeal.