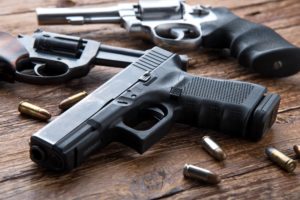 Mr. Dudley has defended against numerous types of firearms prosecutions, including:

These prosecutions have principally been in federal court, but some have been in state courts as well. Repeatedly throughout his career, Mr. Dudley has defeated firearms and other weapon allegations at trial or through pursuing pre-trial dismissal motions.

If you have been charged with an illegal firearms charge, contact criminal defense attorney David M. Dudley.