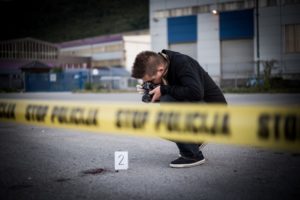 Mr. Dudley has won murder and attempted murder cases at trial in both federal and state courts. He has obtained the dismissal of numerous other such cases at preliminary hearings and other pre-trial proceedings.

Mr. Dudley has won these types of cases by combining his superior intellectual acumen with an ability to present complex legal and factual issues in simple and understandable terms. His cross-examination skills are such that he can impeach the credibility of witnesses ranging from the most academically sophisticated forensic experts to the most street savvy government informants.

Murder Statistics in the U.S.

In the United States in 2008, there were 14,299 murders, according to Federal Bureau of Investigation (FBI) statistics. Of those victims, 11,154 were male, 3,103 were female and the sex of 42 remained undetermined.

Murder is defined as the killing of one person by another with malice aforethought. A first-degree murder is an unlawful killing that is willful, deliberate and premeditated. Second-degree murder is the unlawful killing of one person by another without deliberation or premeditation, but with malice aforethought.

If you’ve been accused of murder, you know you’re in serious trouble. Murder is considered one of the most heinous crimes one person can commit against another. It is punished by the harshest of penalties.

Being accused of murder makes you an unsympathetic character in the eyes of many jurors. You will need a highly skilled and experienced criminal defense attorney, from the beginning, to ensure the best outcome to your case.

Mr. Dudley has the skill, the experience and the resources you need. He has won murder and attempted murder cases at trial in both federal and state courts and has obtained the dismissal of cases at preliminary hearings and other pre-trial proceedings.

He will scrupulously gather evidence, interview witnesses, and do whatever it takes to make sure you are tried fairly, that your side of the case is heard, and that you have the best possible chance of winning. Contact Mr. Dudley for an evaluation of your case.  He is admitted to the United States Supreme Court and seven federal circuit courts of appeal, and has also been admitted to practice in 44 federal district courts and 48 different state and county jurisdictions nationwide.