Attorney David M. Dudley has represented several defendants that have been charged under federal organized crime statutes. For instance, he offers experienced and aggressive criminal defense representation for individuals accused of complex federal drug crimes, including the sale, distribution, trafficking, and manufacturing of a controlled substance.

When Was Organized Crime Started? 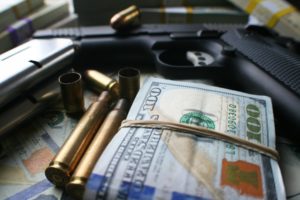 Organized crime can be linked to the era of Prohibition, which began Jan.16, 1920 when the 18th Amendment to the Constitution became effective. It was the job of federal prohibition agents to enforce the law prohibiting the manufacture, transportation, importation, exportation, and sale of alcoholic beverages. The law, however, did not ban the possession or consumption of alcohol.

The Women’s Christian Temperance Union, which was largely responsible for the establishment of Prohibition, believed the act would protect families, women, and children from the consumption, abuse and scourge of alcohol.

But, the law only seemed to make the spread of alcohol consumption flourish. From speakeasies and home-brewing to the office of President Harding, alcohol was made and served in vast quantities. Such a discrepancy between the law and what the citizens practiced led to pervasive contempt for authority and planted the seeds for organized crime. Bootlegging (the importation), manufacturing and distribution of alcoholic beverages became widespread and formed the basis for Al Capone’s criminal activities.

How Did Prohibition Lead to Organized Crime?

Bootlegging alcohol was only the beginning of organized crime. Organized crime refers to a conspiratorial enterprise that is engaged in illicit activities as a means of generating income.

Organized crime groups go by various names including cartel, mafia, syndicate or triad. The groups wipe out their competition either by specialty, such as the drug trade or by geographic area.

How Did the RICO Act Start?

In 1970, Congress passed the Racketeer Influenced and Corrupt Organizations Act (RICO Act). Racketeering according to federal law includes many offenses, only some of which are:

Punishment for RICO crimes is especially severe. Mandatory punishment for a single RICO conviction is 20 years in prison. Forfeiture of property gained by RICO activities is also very harsh.