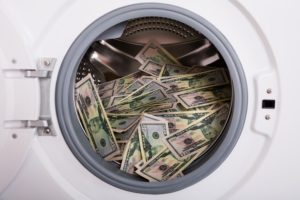 Unlike many large corporate law firms, Mr. Dudley structures a flat fee to cover these types of cases, rather than charging high hourly rates for work that is often unnecessary.

Mr. Dudley has an in-depth knowledge of financial-crimes cases and takes an aggressive approach to minimize his clients’ sentences. In some cases, he has reduced his client’s financial culpability by millions of dollars.

Money laundering refers to the act of hiding the true source of money that is being earned from an illegal enterprise. It is a complicated crime that involves intricate details, and in many cases, several financial transactions and outlets across the world.

In the more recent years, since 9/11, money laundering has come under a much higher degree of scrutiny as terrorists are often involved in money laundering as a way to fund their criminal efforts.

Regardless of whether you are funding terrorist acts, the penalties for financial crimes are usually severe. You could be facing many years in prison and outrageous fines. To ensure the best outcome in your case and to avoid harsh penalties, you should contact money laundering attorney Mr. Dudley as soon as possible. He’s represented individuals facing major criminal allegations in 36 different states and handled matters in both the trial and appellate courts, state and federal. Mr. Dudley is admitted to the United States Supreme Court and seven federal circuit courts of appeal.